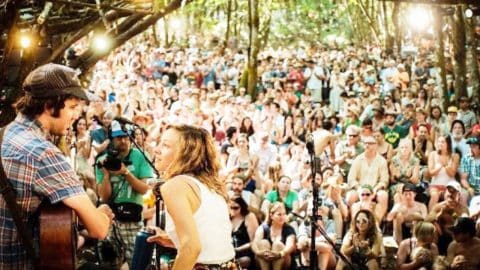 Last weekend, thousands of music fans flocked to Happy Valley, Oregon to enjoy a weekend filled with incredible performances and a good time. This week, crews showed up to Pendarvis Farm to break down and clean up after the Pickathon Music Festival.

Crews were using a cherry picker type lift to remove rope that were securing tents that covered the main stage.

“There were two people in the basket at the time the cherry picker tipped over,” Fire Captain Brandon Paxton says. “Tragically, both people were killed.”

Later in the day, Clackamas County Sheriff’s Office released a statement on how the two people, who were arborists, were killed.

“The arborists had been ascending in a boom lift before climbing further up trees to get to ropes holding up the complex shade installation,” the Sheriff’s Office said. “They were wearing safety equipment and were roped to the boom lift, which was reportedly positioned on an incline.”

The festival released the following statement.

We are shocked and deeply saddened by the tragic loss of two members of the GuildWorks crew during breakdown of this year’s festival.

We will wrap our collective arms around all affected and share in the grieving process. Please stay connected to Pickathon as we work to provide support to the families.

The names of the arborists have yet to be released. Our thoughts and prayers are with their family and friends.