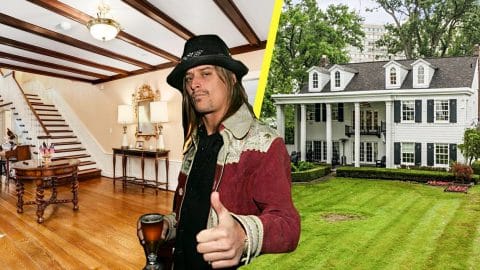 One of Michigan’s most-famous millionaires, the country/rock/rap singer known for his wild personality and edgy songs has put his former mansion up for sale – and the supersized home looks fit for a king!

Detroit is becoming a booming housing market and with the homes of legends like Aretha Franklin going up for sale, adding another super-luxe home to the list is just another day to the real estate agents there.

Originally purchased for just $465,000 in 2012, the grand home on the waterfront of the Detroit River sits on the same street as the official Detroit Mayoral Mansion that is home to the city’s mayor.

Kid Rock’s home doesn’t look like the typical bad-boy mansion you might think he’d own and is actually much more stately and colonial in style.

The 6,000-square-foot mansion boasts six bedrooms, a library, chef’s kitchen, stunning grand foyer, and formal dining and living spaces. But, it’s the master bedroom that will really leave you breathless.

With a custom boathouse and upper deck for entertaining, your summer parties will be off-the-chain – but likely you won’t use it much during those Detroit winters.

Check out all the stunning photos below!

Truly this rockin’ mega-mansion is too huge to show you all of the photos, so jump on over to Zillow.com to see the rest!