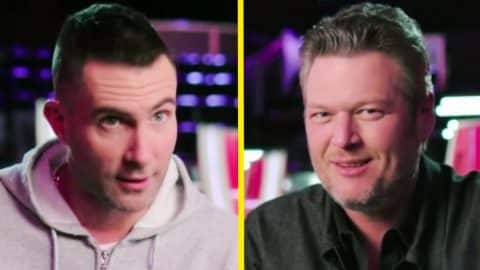 For 16 seasons, we watched Blake Shelton and Adam Levine hurl all sorts of insults and teasing comments at each other on The Voice. The two were constantly coming up with new ways to get under one another’s skin.

So when the two coaches were told to describe each other using only one word, they were faced with quite the challenge. These are the same people who have called each other “ding-dong” and “poop face,” so it seemed like this was going to be tough for them.

Shelton and Levine were put up to this seemingly difficult task as part of an outtakes clip The Voice released as a digital exclusive during Season 16. The other two coaches also chimed in, as did the contestants on the show.

Everyone was asked about Levine first, prompting kind descriptions such as “gifted,” “sexy,” and “rockstar.”

But Shelton obviously wasn’t going to pick such flattering words to describe his frenemy. Instead, he settled on a pretty hysterical choice, the word “dumb.”

What Did Everyone Say About Blake?

Everyone was asked about Shelton next, and once again, most people had flattering things to say about the six-time winning coach. Kelly Clarkson had one of the best responses of all, calling him her “brother.”

But Levine seems to disagree with the last of those three terms, as one of the words he used to describe Shelton was “unattractive.” He technically cheated on this, because he actually used another word to describe him earlier on in the clip, and it was the hysterical choice of “redneck.”

Hey, someone else said that “America” was the first word that came to mind when they thought of Shelton, so Levine just took it one comedic step further!

You can watch all of the hilarity unfold in the video below as Shelton and Levine attempt to describe each other and their fellow coaches using only one word. The things they have to say about Clarkson are pretty funny as well!