Before They Were A Couple, ‘Idol’s’ Maddie & Caleb Sang Miranda Lambert Song Together 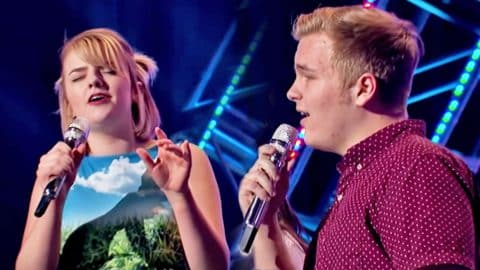 On the season finale of American Idol, Ryan Seacrest not only announced who the champion was, he also helped reveal one of the show’s best kept secrets: the top two contestants were a couple!

Champion Maddie Poppe and runner-up Caleb Lee Hutchinson were scheduled to sing a sweet duet together, and before they did, Seacrest asked if the song and collaboration with Poppe had any significance.

“Well, you know, Maddie’s like my best pal,” he said to Seacrest, the audience, and millions of people watching at home. “And I’ve known her since the beginning of Hollywood Week and she actually happens to be my girlfriend, so that makes it easier.”

His shocking confession sent the crowd into a frenzy and made the three judges freak out! Katy Perry started literally spinning in her chair, with some help from Luke Bryan, and Lionel Richie just stood with his hands in the air.

After Poppe was declared the champion, the two professed their love for one another on Instagram, which led us to believe their relationship was kept under wraps for much longer than we thought! Turns out, Poppe was blown away by Hutchinson’s voice during the Hollywood Week round and knew she had to team up with him for the group round. They’ve been together ever since!

Their group round was never aired on television or even posted online. It was such a mystery that no one even knew what song they sang – until now! American Idol finally released the footage after months of fans begging for them to. Together with two other singers, they performed a slowed-down jazzy version of Miranda Lambert’s song “Mama’s Broken Heart.” While they stood on opposite sides of the stage from each other, it was clear that their voices stood out from the rest.

Poppe had the sweetest response to Idol releasing the footage. She tweeted, “Crazy back then I had no idea how much I’d love him.”

Crazy back then I had no idea how much I’d love him https://t.co/saV4bsdYl0

Hutchinson responded, “It’s so amazing how the Lord brought us together. I am so thankful to Him!”

It’s so amazing how the Lord brought us together. I am so thankful to Him!

You’ve waited long enough for this moment! Watch Poppe and Hutchinson’s first ever performance together that never aired on television below.