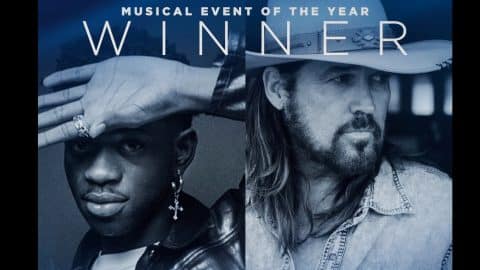 The winners of the biggest collaborative award have finally been announced during what is known to be the biggest night in country music: The CMA Awards!

Previously called The Vocal Event of The Year, the award for Musical Event of the Year is given to each artist and producer involved in the event.

The Country Music Association defines the award as this: “An event is defined as a collaboration of two or more people either or all of whom are known primarily as a Country artist.  They must have performed together, as a unit, on a Country single or Country album initially released domestically during the eligibility period with each artist prominently featured and credited on the initial recording as a collaboration.  Live performance events and background vocals are not eligible.”

Nominated for the category this year were five sets of artists and producers who worked very hard for a spot in the running. See them all below:

Early in the day ahead of tonight’s thrilling award show, the Country Music Association revealed several winners to get the excitement started…and one of them happened to be The CMA Musical Event Of The Year!

Check out the CMA’s full tweet revealing the winner below along with their chart-topping hit in the music video!

Congratulations to @LilNasX and @BillyRayCyrus for winning #CMAawards Musical Event of the Year for "Old Town Road (Remix)". The winner was just announced on @GoodMorningAmerica! pic.twitter.com/yWmTbr8UXI