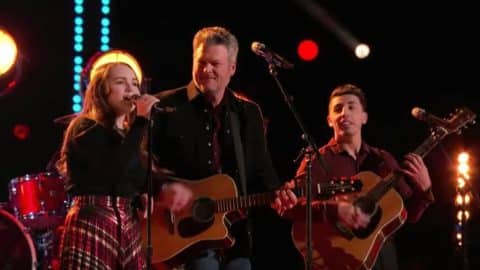 At some point during each season of The Voice, the coaches join their teams to deliver a group performance. When it came time for Team Blake to hit the stage during Season 17, coach Blake Shelton only had two team members to sing with: Kat Hammock and Ricky Duran.

Both artists eventually landed in the Top 10 after earning enough viewer votes to advance without needing to compete for the Instant Save.

If you need help thinking of what to be thankful this year, we've got 10 ideas… #TheVoice

But although Shelton’s team was small, it was mighty. The duo proved that when they joined their coach for their group performance during a results show.

Even though Shelton is a certified country artist, Duran and Hammock do not consider themselves to be country. So instead of singing a country classic, the trio decided to try their hands at an iconic rock song.

The song they performed was “Takin’ Care of Business,” which was recorded by Bachman-Turner Overdrive and released in 1974. It went on to inspire the title of the 1990 film Taking Care of Business, and also served as its theme song.

Through the years, “Takin’ Care of Business” has played in other films and TV shows such as Daddy Day Care, A Knight’s Tale, and The Simpsons. And thanks to Team Blake, we can now say it is part of Voice history as well!

Shelton opened his team’s performance by singing solo. Duran then jumped in for a solo of his own, followed by Hammock.

From that point forward, Shelton let his team members carry the performance themselves. He never took on another solo, opting to stand back and keep the spotlight on Duran and Hammock.

They left Voice viewers thoroughly entertained, and they received a great deal of praise on Twitter. See just a few of the enthusiastic comments about their performance below.

Loving this performance! @KatHammock7 has such an awesome voice & @IamRickyDuran is an amazing performer. Go #TeamBlake 👍🏽

Love the way he let the others shine , love papa Blake

In other words, Team Blake knows how to rock!

Be sure to check out the video below to see Shelton, Duran, and Hammock sing “Takin’ Care of Business.” They are such a talented bunch of performers!