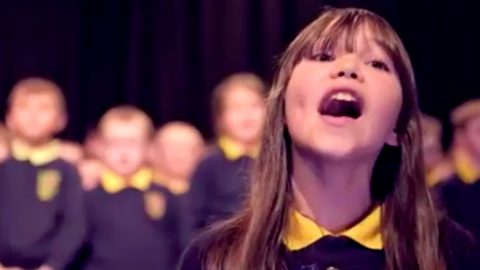 10-year old Kaylee Rodgers from Northern Ireland has a voice that is being heard around the world.

A recent video of the middle schooler singing a version of Leonard Cohen’s “Hallelujah” with her school choir has gone viral, not only because Rodgers has an incredible voice, but because she’s overcome some incredible challenges to share that voice with the world.

According to her principal, Colin Millar, Rodgers has autism and attention deficit hyperactivity disorder (ADHD), but singing has helped her build up her confidence.

“Hallelujah”, written by Leonard Cohen over the course of five years, was recorded by dozens of artists including Celine Dion, Justin Timberlake, Willie Nelson, and Susan Boyle. But, Cohen passed away in November, just weeks before Kaylee Rodgers’ rendition of his most famous song was released. Somehow, we’re sure that Cohen would approve of this stunning remake.

Hear Kaylee Rodgers sing “Hallelujah” in the video below.