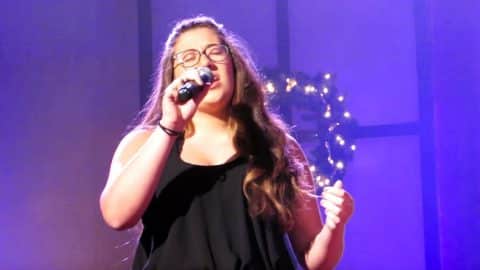 Born into a musically-driven family with parents Vince Gill and Amy Grant, Corrina Grant Gill is a natural when it comes to singing. Both her parents have issued many No. 1 singles to the charts over the years, and now it looks like Corrina might be headed the same direction!

In a video uploaded by the 15-year-old, she is sitting at her keyboard and begins to play a beautifully slowed-down version of OneRepublic’s 2007 pop rock hit, “Apologize”, which she says is “one of [her] favorite songs”.

The song earned a Grammy Award nomination for Best Pop Performance by a Duo or Group and has been covered many times over by country artists including Luke Bryan!

The song has become well-known worldwide and was written by the incredibly talented singer/songwriter, Ryan Tedder – who got his start in Nashville! Tedder has written hits for many artists over the years including Carrie Underwood, Kelly Clarkson, and Hunter Hayes.

Watch this truly stunning performance by the daughter of a country legend in the video below!