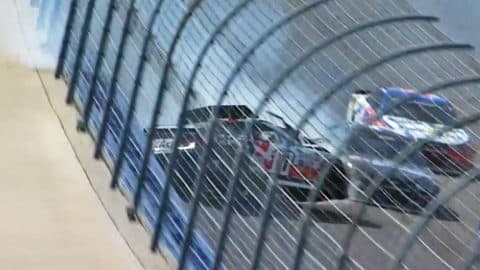 Named one of the most successful women in the history of NASCAR, Danica Patrick ended her Auto Club 400 race early on Sunday after she wrecked her car in a collision with another driver.

According to Fox Sports, NASCAR is prepared to make a decision this week regarding the choice to take action against Patrick for the series of events involving Kasey Kahne this weekend.

During Lap 119, Patrick was just passed the start/finish line and on the inside of the track from Kahne when she was preparing to pass him and the front of his car clipped the rear of her SHR Chevrolet sending her barreling headfirst into the outside wall. Fortunately, both drivers were unharmed in the incident.

“I was passing him. He was behind me in the right rear,” Patrick says. “The next thing I know, I was getting spun up the track.”

Kahne has publicly accepted fault for the incident, but racing regulators are looking hard at the footage of Patrick’s behavior following the crash when she pulled herself from the car and was gesturing at Kahne from the side.

We are glad that both Patrick and Kahne are safe following their collision yesterday, and we will have to wait a few days to see what sanctions NASCAR’s regulatory board may impose on Patrick.

Watch a video of the crash below and let us know what you think in the comments below!