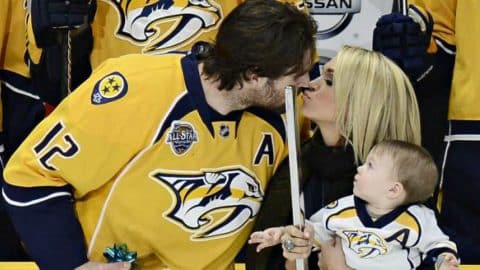 A few weeks ago, Carrie Underwood‘s husband, Mike Fisher, played his 1,000th career NHL game. But, it was last night (March 21) that Fisher was formally honored by his team, the Nashville Predators, with a pregame ceremony that included a the presentation of a silver hockey stick, a framed collage featuring photos from his 16-year career, and a crystal from the NHL.

With the accomplishment, Mike Fisher became the 301st player to ever reach the milestone, one of only 25 active players to reach 1,000 games, and the 4th to do so as a Nashville Predator.

Fisher’s wife, son Isaiah, and parents were on hand to help the athlete celebrate. The family gathered on the ice for the presentation of gifts and to watch a video that featured well-wishes from fellow hockey players and some of Nashville’s finest musicians including, Dierks Bentley, Luke Bryan, Rascal Flatts, Vince Gill, and of course, Carrie Underwood who opened the video tribute.

“Hey Mike. I just wanted to congratulate you on your 1000th game playing in the NHL. I am so proud of you for so many reasons,” Underwood said. “But, specifically, tonight I’m proud of you because I know how hard you work at everything you do, and how much dedication you have towards hockey and towards this team. I just think you’re the best. So, congratulations. I love you.”

While the ceremony honored Mike Fisher, it was his one-year-old son Isaiah who stole the spotlight. Underwood and Fisher have occasionally shared photos of their son on social media, but until now the public hasn’t had a chance to see the cutie in action. Isaiah donned a tiny Predators jersey with “Fisher” on the back and happily took in all of the activity surrounding him.  Watch the ceremony video below to see Isaiah in action.

Congratulations to Mike Fisher on his amazing accomplishment!