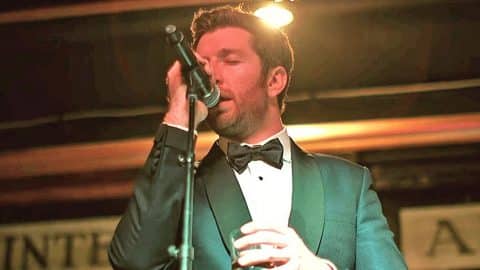 Brett Eldredge is currently one of the biggest names in country music, with number one hits such as “Beat of the Music” and “Lose My Mind.” But what few know is that the country boy from Paris, Illinois, is also a talented jazz singer.

Eldredge grew up singing jazzy songs, especially those by Frank Sinatra. Even though he’s now a country music star, Eldredge still has a fondness for Sinatra’s songs, and performs them whenever he gets the chance.

A month after the 2014 CMA Awards, Eldredge put on his best tux and took the stage for a performance of some of Sinatra’s signature hits in front of a small crowd. Eldredge continues to put on such performances every now and then, and blows the crowd away every time he does.

When Rolling Stone asked Eldredge in 2015 if he ever planned on recording an album of Sinatra-style songs, he said he definitely wants to some day.

Although Eldredge hasn’t recorded a jazz album yet, he has taped many of his jazz performances. We’ve gathered up some of our favorites and have included them below for you to enjoy.

“The Way You Look Tonight”

“You Make Me Feel So Young”

These videos just go to prove that no matter what type of song Eldredge sings, he makes it sound amazing!