By Manly Bryant on March 23, 2016
Advertisement 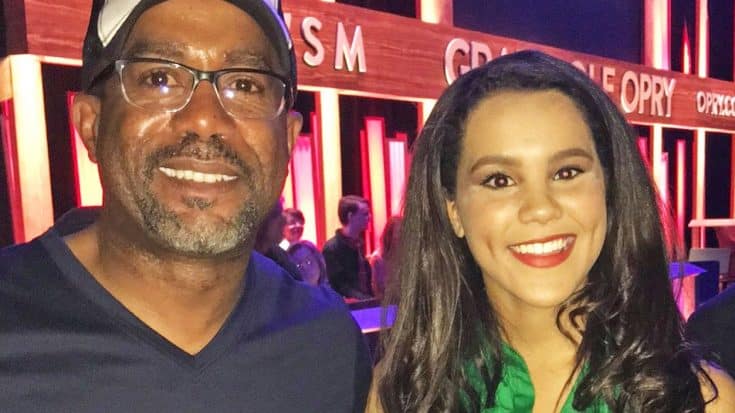 Hot off the heels of her long and powerful run on the 15th season of American Idol, one of the youngest contestants, Tristan McIntosh made a surprise Opry debut all due to happenstance!

As McIntosh revealed in a video on Facebook, her mother suggested she send a tweet to Darius Rucker who was set to perform at the Grand Ole Opry on Tuesday (March 22nd). His response floored her!

.@dariusrucker would LOVE to be ur #sidekick at the @opry on Tuesday ;))

Cmon out if u r I Nashville https://t.co/iPnejHnDnx

With that, the 15-year-old saw a dream of hers come true and showed up backstage for Tuesday night’s Opry show! But, Rucker had a surprise in store for the incredibly talented teen – he invited her on stage to sing his super-hit “Wagon Wheel”! How’s that for a first time at the Opry?! Not only did he invite her out to the Opry show, bring her on stage for a performance, but this guy also invited her back for her very own Opry Debut! McIntosh is completely thrilled that her career is taking off in huge ways, especially since she was one of the final six contestants on ‘Idol’ before being eliminated recently.

This once-in-a-lifetime experience surely has the young country singer excited and she’s already promised to give the details of her upcoming Opry debut as soon as things are finalized!

Watch the video below for a glimpse at Darius Rucker’s stunning performance of “Alright” at the Opry!