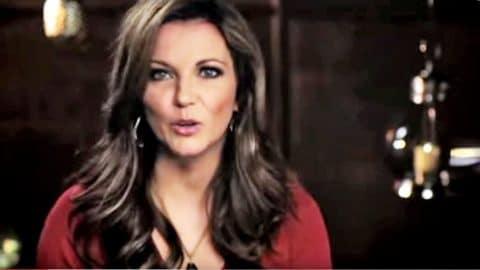 Taking to social media, legendary country artist, Martina McBride, calls on fans to pray for the people involved in this emergency situation, both victims and first-responding emergency personnel.

Over 72,000 acres of land in Oklahoma and Kansas have been scorched after a grass fire stared late Tuesday afternoon (March 22nd). Oklahoma Forestry Services have coined the blaze the “Anderson Creek Fire” and state that crews are dealing with 57 mph gusts while the battle the far-reaching flames.

Driving through a part of her hometown, McBride posts a photo showing a street in Medicine Lodge, KS where you can barely see the buildings because the smoke has grown so thick.

“There is a massive gras fire in my home county in Kansas,” the singer writes. “I’m so concerned! My parents are ok. Please pray for the firefighters, volunteers, and residents of Barber County.“ KAKE/ABC News calls the fire “enormous” and says that currently it “cannot be stopped”. A state of emergency was declared in two counties when the blaze had consumed thousands upon thousands of acres of land and closed one major route.

Below is the full post from legendary McBride and one of the news reports covering the emergency situation from the news station.

We are keeping the residents and their families in our thoughts and prayers during this scary time!

There is a massive grass fire in my home county in Kansas. Has burned over 72,000 acres. No injuries reported. This is…