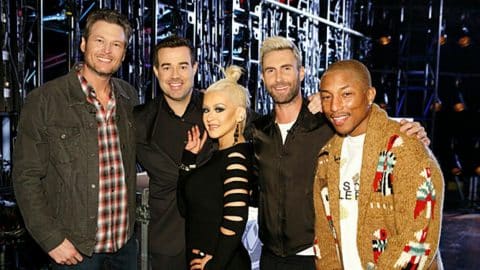 During the first 10 seasons of ‘The Voice’, only one of the four infamous red chairs has been occupied by a female. Christina Aguilera, Shakira, and Gwen Stefani have all taken turns behind the red button, but now two new female artists will be joining the reality singing competition, one of which has country music ties.

In a post made to her social media pages Friday evening (March 25), Miley Cyrus announced that she will be joining ‘The Voice’ as a judge for it’s 11th season.

It’s true! I am going to be the newest judge on Season 11 of The Voice @NBCTheVoice #thevoice ?❤️? pic.twitter.com/hP5AyHDtdh

While Miley Cyrus’ musical style is far from country, her dad, Billy Ray Cyrus, was one of the biggest stars of the ’90s. We also can’t overlook the fact that her godmother is none other than country goddess Dolly Parton. There’s no denying that 23-year old Miley is full of talent and has some deep roots to pull from as she takes the coaches seat.

Miley’s announcement was quickly followed by a statement from Grammy-award winning pop star Alicia Keys who said that she will also be joining ‘The Voice’ for its 11th season. According to Billboard, Cyrus will be replacing Christina Aguilera and Keys will take Pharrell Williams’ red chair.

Long-time coaches Adam Levine and Blake Shelton renewed their contracts and will be sitting alongside Miley Cyrus and Alicia Keys next season.

What do you think of the switch up?