Surprising ACM Win For 2016 Vocal Duo Of The Year 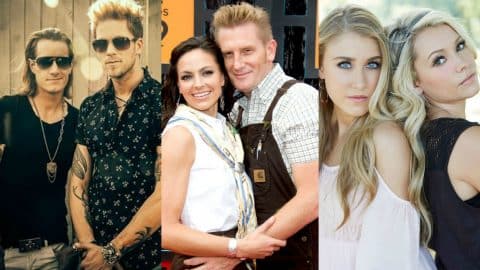 The Academy of Country Music Awards don’t air until tomorrow night (Sunday, April 3), but five category winners have already been announced. Florida Georgia Line is the latest to receive and ACM award after being given their trophy for Vocal Duo of the Year. Tyler Hubbard and Brian Kelley were given their award at a No. 1 party at Las Vegas’ Delano’s Skyfall Lounge where they were celebrating their top charting singles from their latest album, Anything Goes.

This is the third consecutive year that Florida Georgia Line has won Vocal Duo of the Year. This year they beat out husband-wife duo Joey+Rory as well as Brothers Osborne, Dan + Shay, and Maddie & Tae.  Joey+Rory were the hands-on favorite to win the award after the success of their Hymns That Are Important To Us album and the couple’s influence on the country music community over the last year.

The 2016 ACM Awards are set to air live from the MGM Grand Garden Arena in Las Vegas on April 3, beginning at 8PM ET on CBS.