Miranda Lambert’s SHOCKING Reason For ‘ACM’ Song Choice Will Blow You Away!

By Miranda Raye on April 20, 2016
Advertisement 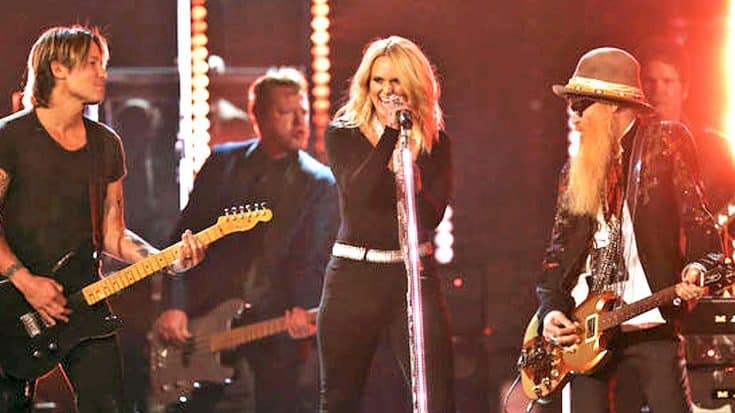 Out of all the outstanding performances at this year’s ACM Awards on April 3, Miranda Lambert‘s is the one that still has people talking. Right on the heels of her win as the ACM Female Vocalist of the year, Lambert rocked the stage with an electrifying cover of ZZ Top‘s “Tush.”

Lambert was joined on stage by Keith Urban and ZZ Top’s Billy Gibbons, who accompanied her on guitar and had their own standout solo moments. The crowd instantly soared to their feet and started grooving along, and many went on to call Lambert’s performance the best of the night.

But as it turns out, Lambert’s ACM performance of “Tush” almost didn’t happen. Why? Well, because she had never planned on singing the song in the first place.

The ACM Awards‘ executive producer RAC Clark revealed in the April 18 issue of Country Aircheck that Lambert’s performance was something she had to throw together at the last minute. Originally, Lambert had planned to debut a new song on the show and then release the single immediately afterward.

However, Lambert’s new music wasn’t ready in time for the show, but she still wanted to perform. She ended up discussing different songs she could cover, and that’s how her “Tush” performance was born, as Clark explains:

“‘Tush’ came up and that was perfect. It’s a rocking 2:30 that Miranda can bring her great energy to. She texted Keith Urban to play guitar and he said he’d like to include another player. I took it upon myself to check Billy Gibbons’ availability and he had one night off on his tour – the night of the show. So he got in about 2 a.m., they all did an off-site rehearsal that morning, did the dress rehearsal and did the show.”

Wow, after watching Lambert’s performance, we never would have guessed she only rehearsed it with Urban and Gibbons twice! You can see for yourself when you relive her rockin’ performance in the video below.

We’d say that Lambert’s ACM song choice paid off, how about you?