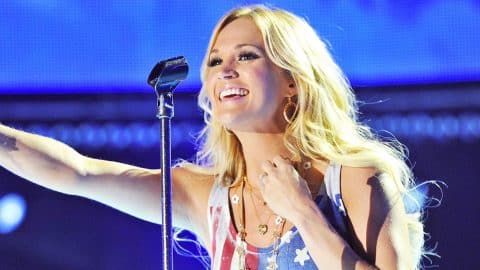 Underwood’s kept fairly quiet about her political views in the past, and said that she doesn’t like to publicly express her support for any particular candidate. She feels that everyone should make their own decisions about who they want to vote for, and she doesn’t want to influence her fans with her personal opinions.

However, Underwood never said that she wouldn’t consider embarking on her own presidential campaign.

Although it’s a bit late in this year’s presidential election, the “Church Bells” singer appears to be ready to throw her hat into the ring. That’s right, Underwood took to Twitter on Tuesday (May 3) to announce her presidential candidacy.

Underwood also introduced her campaign team in a photo, with each of them wearing blue t-shirts with “Underwood 2016” printed on the front.

“Pretty sure we’ve got this in the bag!” Underwood wrote.

I’d like to announce my candidacy…this is my campaign team…pretty sure we’ve got this in the bag! ???????? pic.twitter.com/DDEox6WoWw

Alright, we know Underwood is joking, but how interesting would it be if she actually ran for president? Apparently, many of her fans felt the same way, as they responded to her announcement saying how she would have their vote.

For now, Underwood’s big “campaign” of 2016 is her Storyteller Tour, which continues to amaze all those that attend. You can watch her perform her latest single “Church Bells” in the video below.

What about you? Would you cast your vote for Underwood to be president?