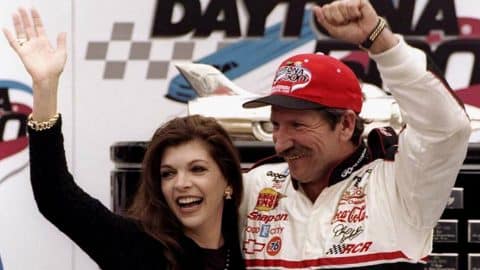 Dale Earnhardt Sr.’s widow, Teresa, continues to fight her late husband’s son over the use of the Earnhardt family name.

Kerry Earnhardt, Dale Sr.’s son from his first wife, owns a business with his wife in which they sell and promote an “Earnhardt Collection” of homes. In March, the Trademark Trial and Appeals Board dismissed Teresa Earnhardt’s claim against Kerry saying “The opposer did not offer any testimony or evidence that the goods and services in the registrations were related to applicant’s goods and services.”

This week, Teresa Earnhardt appealed the decision and claimed that Kerry is improperly using the trademarked Earnhardt name.

Kerry Earnhardt has yet to publicly address the case, but his sister took to Twitter Friday to let her feelings be known.

Hate that my brother & family have to deal w/ this nonsense for over 4 yrs. It’s our name too! We were born w/ it! https://t.co/QtRQ7dZKfw

Kelley Earnhardt also shared an open letter to her step-mother that was written by Dave “The Godfather” Moody, a NASCAR commentator. In the letter, Moody called out Teresa Earnhardt for her “mean-spirited effort to prevent Dale’s children from using their own name.” Moody also writes, “Perhaps it’s time for you to invest as much time and energy to supporting your late husband’s children – all of them – as you do to safeguarding his money. Perhaps then, we will once again be free to remember him (and you) as fondly as you both deserve.” Read Moody’s letter in full by clicking here.