By Jennifer Pernicano on May 10, 2016
Advertisement 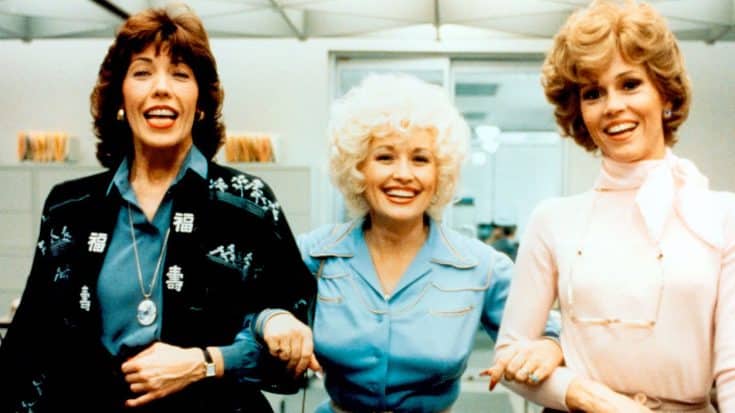 In 1980, the world was introduced to the legendary trio that is Dolly Parton, Lily Tomlin and Jane Fonda.

The three ladies joined forces for the film Nine to Five, a box office hit and all around funny movie. They play secretaries to a “sexist, egotistical, lying, hypocritical bigot” who they fantasize getting even with.

Parton’s character famously threatens their boss, saying she’ll “turn him from a rooster to a hen with just one shot” from her gun she keeps in her purse.

For over 30 years now, fans have been begging for a Nine to Five reunion with Parton, Tomlin and Fonda.

Prayers were answered when Tomlin and Fonda announced they would be co-starring in a Netflix original series, Grace & Frankie, which just premiered the second season. They play women who form an unlikely bond after their husbands of 40 years leave them for each other!

In just about every press event promoting the second season, interviewers always ask if Miss Parton will be making an appearance at any point, and now, we finally have some answers!

In an interview with AOL, Tomlin says that she and Fonda would love to have Parton guest star, but Grace & Frankie co-creator Marta Kaufman, who was also responsible for TV’s smash hit Friends, has said no…for now.

“Here’s the deal,” Kauffman explains. “We’re still creating a world and the world is ‘Grace and Frankie.’ These are characters you want to know and invest in. And the minute you bring in Dolly Parton — who I love, by the way — it’s ‘9 to 5.’ No matter what you do, the thought is, ‘Oh, look, it’s a ‘9 to 5”’ reunion,’ and you’re taken out of the show. So I will never … well, no, that’s not true. I will say there will never be a ‘Friends’ reunion movie, but I will not say ‘never’ on the Dolly Parton thing.”

So, what we’re hearing is “not right now” on the Nine to Five reunion! Watch the trailer for Grace & Frankie below and catch it on Netflix!