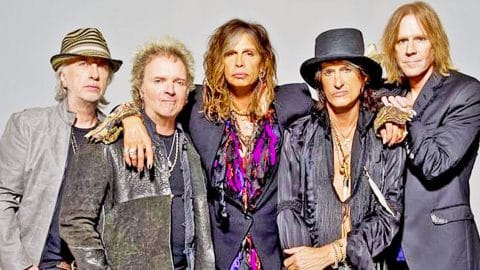 Steven Tyler may have to “Dream On” about being welcomed back into Aerosmith with open arms.

The legendary group’s frontman shocked everyone when he announced his plans to put together a solo country album. As to be expected, the album has generated a lot of buzz, especially following the release of his first two singles “Love Is Your Name” and “Red, White & You.” Both rock and country fans were pleasantly surprised by the two tracks, which blend southern rock and country to create a unique sound.

However, Tyler’s bandmates have different feelings about his solo venture. During an interview with USA Today, lead guitarist Joe Perry didn’t hold anything back when he expressed his opinion about Tyler’s country career.

“Steven is in Nashville doing whatever he’s doing,” he said. “He’s got a (bleeping) rhinestone cowboy hat going ‘Yippee ki yay.’ I don’t know what else to say about that.“

Tyler created more tension in the band when he said he didn’t want to go on tour with them in 2016. Guitarist Brad Whitford told Metal Insider that Tyler’s choice to focus on his solo career left the band feeling “a little bit abandoned by him.“

Although Tyler didn’t want to partake in a 2016 tour, the rest of the band would still like to tour together, even if it means they have to replace Tyler.

During a more recent interview with Metal Insider, Whitford said the group has toyed with the idea of bringing in a guest artist to replace Tyler. A few artists Whitford would like to see fill in Tyler’s shoes include Guns N’ Roses’ lead singer Axl Rose and lead singer of Alter Bridge/Slash Myles Kennedy.

“Whether it will happen I don’t know,” Whitford said. “I think it would be great.“

No matter what his bandmates say, it seems that Tyler’s country career is set to take off. He still hasn’t announced a release date for his album yet, but his first two singles are catching on fast! You can listen to his newest single, “Red, White & You” in the clip below.

What do you think about this whole ordeal?