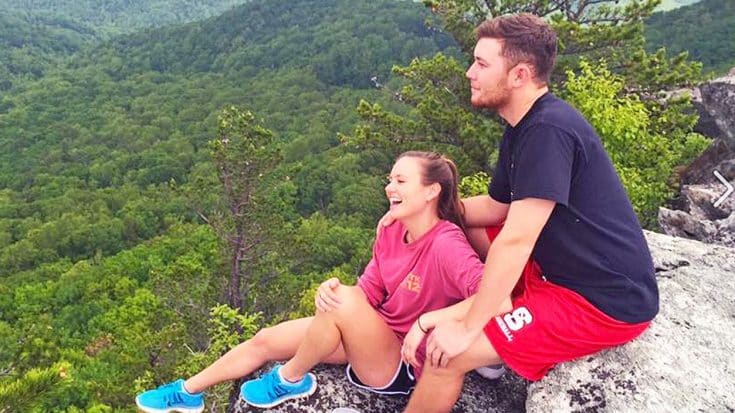 In recent weeks Scotty has been traveling across the country to promote his new autobiography Go Big or Go Home: The Journey Toward the Dream. But recently, he had the opportunity to enjoy some time in his home state of North Carolina, and he took the phrase “go big or go home” to a whole new level.

Scotty shared a series of photos from a hiking trip at the Little Lost Coves Cliffs in North Carolina, which look equal parts beautiful and terrifying. Along with his sister, Ashley, and his girlfriend, Gabi, Scotty managed to tackle the terrain and got the chance to see some jaw-dropping views.

Many of the photos Scotty shared show him sitting out on a small cliff that extended over the trees below. In one particular photo he threw his hands up in the air, and we bet he probably felt like the king of the world!

Scotty’s fans had an appreciation for his stunning surroundings, but some admitted the pictures made them nervous. Many of his fans were so concerned they begged for him to get down before he scared his mama to death!

Of course, Scotty is just fine, and despite his fans’ worries he didn’t appear scared at all. Neither did Gabi, who stopped to pose with him for a couple of cute snapshots on the same small cliff.

There’s no denying how gorgeous Scotty’s pictures are, but it sure made us nervous to look at them!

Scotty and Gabi have been friends since they were in elementary school, so they’ve gone on plenty of adventures together over the years. Gabi’s even appeared in two of her boyfriend’s music videos, the first being for his 2011 single “The Trouble with Girls.” You can watch that video below.

What about you? Would you have been brave enough to take on those cliffs like Scotty did?