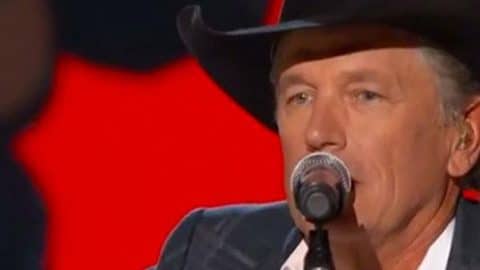 You probably know this by now, but I Cross My Heart is one of the most famous country love songs and one of the best George Strait love songs.  The lyrics to I Cross My Heart are some of the most beautifully written around.You hear it at almost every country wedding you go to for a reason. This famous country song is a perfect song for the first dance, for country wedding receptions, and a perfect love song for pretty much anyone in love, even anyone who wants to be. This George Strait Youtube video showcases some of the best of George Strait music in country music.

This George Strait Song, I Cross My Heart, became a hit in 1992, and it will forever remain a timeless classic representation of love, one that will always stand to be one of the best country love songs ever. The quote from the song, “You’ll never find A love as true as mine” is a country music fan favorite, probably one of the most popular, well known country love quotes around. Check out this awesome video of The King of Country performing I Cross My Heart on Youtube.

I Cross My Heart – Lyrics

Our love is unconditional, we knew it from the start.
I see it in your eyes, you can feel it from my heart.
From here on after let’s stay the way we are right now,
And share all the love and laughter that a lifetime will allow.

I cross my heart and promise to
Give all I’ve got to give to make all your dreams come true.
In all the world you’ll never find a love as true as mine.

You will always be the miracle that makes my life complete,
And as long as there’s a breath in me, I’ll make yours just as sweet.
As we look into the future, it’s as far as we can see,
So let’s make each tomorrow be the best that it can be.

44 Top George Strait Songs That You Will Love Without End

33 George Strait Love Songs That Will Melt Your Heart