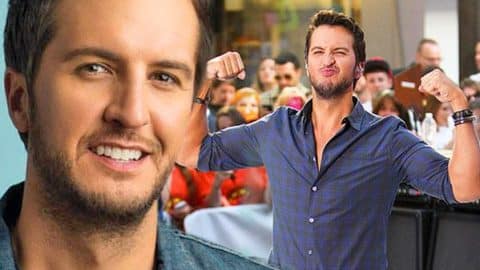 Luke Bryan has made history, y’all! He’s released six – yes, SIX – number one hits off of his album, Crash My Party. That’s right: just one album. Not to mention, the album itself is double platinum. By the end of 2014, it had reached the top spot on the US Top Country Albums (Billboard) chart. Check out his list of #1 songs:

After “I See You” rocketed to the top for the second week in a row, Bryan slid right into the modern history books. If y’all remember, Luke also won Entertainer Of The Year at the CMA Awards and Top Country Artist and Top Country Album at the Billboard Music Awards. Suffice it to say, this album has brought Luke a lot of good things.

Most of those songs are up-tempo, high energy fun – apart from “Drink A Beer”, which Luke described as “the coolest sad song ever”. It’s raw and emotional and really pulls at the heartstrings, especially since Luke connects it to the loss of his very own siblings.

Congratulations, Luke! All your fans know how much you deserve this honor.