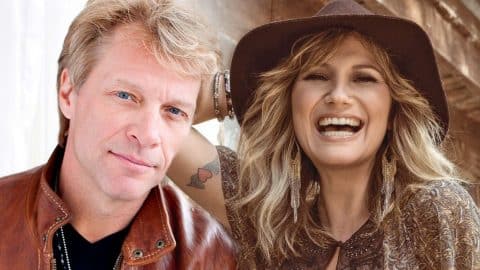 “Who Says You Can’t Go Home” was released on Bon Jovi’s 2005 album, Have A Nice Day. It was written by Jon Bon Jovi and Richie Sambora. A different version, featuring Sugarland’s Jennifer Nettles as Bon Jovi’s duet partner, was released and rocketed to the #1 spot on the US Hot Country Songs (Billboard) chart. This version was actually supposed to feature Keith Urban, but Bon Jovi thought that Urban’s voice was too similar to his own, so he decided on a female duet partner.

In an interview with CMT Insider, Bon Jovi said:

“I knew that the song had great crossover appeal, and we were just trying to find the right voice to complement mine. Initially, I did it as a lark and had Keith Urban sing it. And he was in the studio with us one day… just to see if the concept worked. Our voices were too similar, so we started thinking, ‘Well, maybe what I need is a girl.’”

Bon Jovi also went on to talk about Nettles. “The greatest compliment that I could give her is that she made the song her own,” Bon Jovi said about their collaboration. “She really just captured the essence of the lyric…” We completely agree with his statement.

The official music video features the charity Habitat for Humanity, as volunteers build homes for low-income families. What a wonderful way to promote an outstanding organization.