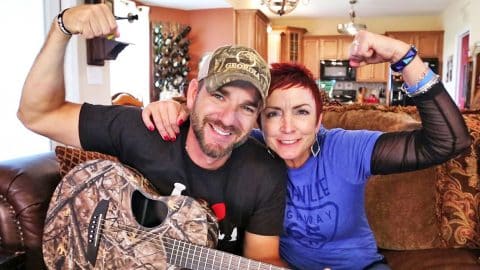 We’re so touched that Craig Campbell teamed up with cancer survivor, Rose Hausmann, to create the beautiful and inspiring song, “Stronger Than That“.

The song was created to raise awareness of colorectal cancer, and we think they are doing an amazing job. In the video, Craig gets personal and tells us that he lost is father to colorectal cancer. He tells us that is the reason he feels so passionate about raising awareness, and why he is the national spokesperson for the Fight Colorectal Cancer group campaign.

When he decided to write this inspirational song, Craig said that it was no question who he wanted to join him. Rose Hausmann is a stage IV colon cancer survivor who has had five relapses, but still remains optimistic and thankful to be here each and every day. She said that she feels honored to join Craig in being the voice for cancer survivors. On the Fight Colorectal Cancer website, Rose said, “This song has a powerful message from people representing the voice of warriors, the ONE MILLION STRONG!” Craig and Rose are the voice for one million people?! Amazing!

Rose is simply fantastic. Her passion and optimism is so beautiful, and her outlook on life is truly an inspiration.

Check out the video to hear Craig Campbell and Rose Hausmann’s video for “Stronger Than That“, and you too will be inspired!