Luke Bryan Dances On Stage With His Mom (Funny!) (WATCH) 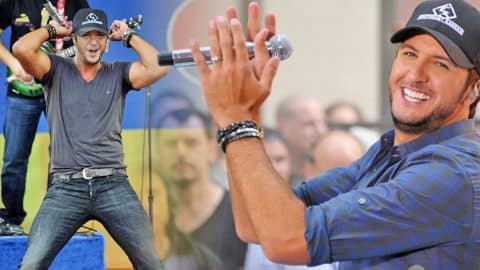 Well, now we know where Luke Bryan gets his dance moves from!!

During Luke’s final performance of his legendary Spring Break shows in Panama City, FL., Luke’s mom hopped on stage to join her son, and wowed the crowd with some pretty hilarious dance moves! Apparently everyone was having so much fun at this performance that even Luke’s mom, LeClaire, couldn’t contain herself! Way to go, LeClaire!

The short clip starts off with Luke and his wife causally dancing on stage at Spinnaker Beach Club. Once his wife hopped down, Luke’s mom was ready to take the stage, so she hopped on and began to shake it! Luke started laughing but then started to hug/guide his mom off the stage. We can’t decide if he was entertained or maybe a little embarrassed! Either way, we love Luke’s mom!

Let’s be honest, Luke has a history of shaking it on stage, but who knew he got these moves from his mom!

Check out the video of Luke’s mom, and you’ll be glad you did!