2017 CMA Award For Entertainer Of The Year Announced 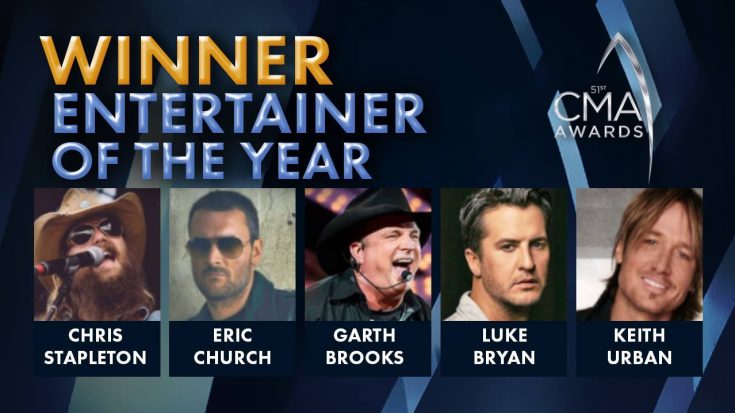 While all CMA Awards are prestigious, none carries more weight than the Entertainer of the Year Award. Every year, this award is bestowed upon the artist that is considered to have been the best entertainer in country music over the course of the past year.

A lot of things factor in to who is chosen as the Entertainer of the Year. The quality and quantity of tour dates is perhaps the main factor considered, as well as the number of albums and singles sold during the past year.

The 2017 CMA Awards had no shortage of deserving artists to nominate for this honorable award. In fact, we have no idea how they managed to narrow down the nominees to only five artists!

This year’s Entertainer of the Year nominees were as follows:

With that, the 51st CMA Awards came to an exciting conclusion as Garth Brooks was revealed to be the Entertainer of the Year!

For the second year in a row, Brooks has been named as the CMA Awards‘ Entertainer of the Year! Brooks won the award during the monumental 50th CMA Awards last year, making it his fifth time winning the award. Now he’s on his sixth!

For the SECOND year in a row, #OpryMember @garthbrooks is your #CMAawards Entertainer Of The Year! ???? pic.twitter.com/R7BMlLUzYO

It’s really no surprise why Brooks was chosen to receive the Entertainer of the Year Award again in 2017. His World Tour remains one of the most popular tours in country music. The concerts often sell out, and when they do he simply adds more shows to his schedule. It isn’t uncommon for those additional shows to sell out as well!

The reason why everyone rushes to go to Brooks’ concerts is because of the energy and passion he brings to each show. Beyond his performances themselves, Brooks makes every concert special by interacting with fans in unique ways, often creating lasting memories and inspiring stories.

It’s clear why Brooks earned this award! Congratulations to him!