2017 CMA Award For Female Vocalist Of The Year Announced 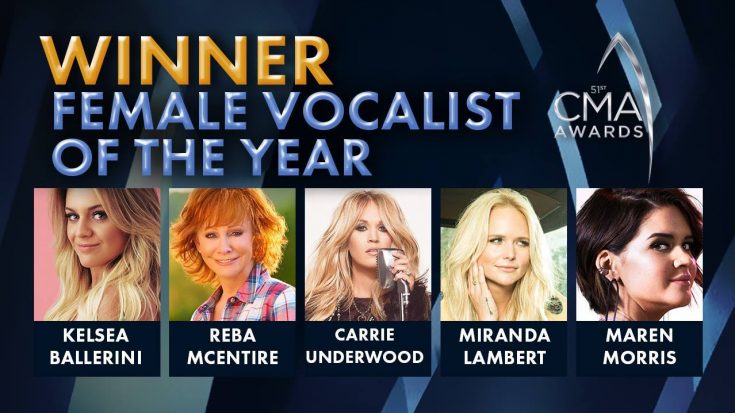 One of the most coveted CMA Awards, besides Entertainer of the Year, of course, is the Female Vocalist of the Year, awarded to the most outstanding female country singer. The nominees are all extremely talented and have contributed to country music this year in a huge way!

While some years, it’s obvious who the winner will be, it seems this year, it could go to anyone and there wouldn’t be a question as to why.

Each nominee has either released a kick-ass album, gone on a stellar tour, gave incredible performances, or won a Grammy for their contribution to country music this year.

The 2017 Female Vocalist of the Year nominees are as follows.

Lambert has taken back the crown after Carrie Underwood won the award at last year’s ceremony. Previously, Lambert won the award from 2010-2015. Her big win does not come as a surprise to many, seeing as she has had one heck of a year with her album The Weight of These Wings, which won Album of the Year at April’s ACM Awards.