2017 CMA Award For Song of the Year Announced 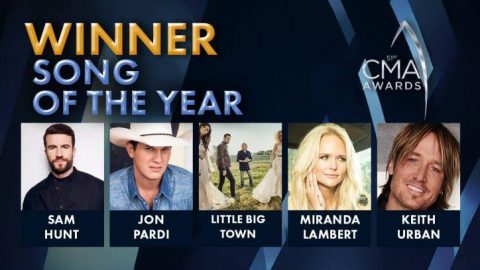 2017 was filled with countless incredible country songs, but only one can be named “Song of the Year.” Every year, we always think this is the that best country music will get, but every year we are impressed by the endless talent that these singers and songwriters put out in the world.

Many songs could have ended up nominated in this category, which is one of the toughest of the night. The Song of the Year award goes to the songwriters, while Single of the Year goes to the performers.

The 2017 Song of the Year nominees are as follows.

Bobby Bones, Karlie Kloss, Luke Combs, and Brett Young did the honors of revealing who the 2017 CMA Award for Song of the Year is awarded to. Fans went wild when they said Taylor Swift’s name!

Country darling-turned-pop-star delved back into her country roots when writing the smash-hit “Better Man” for country quartet Little Big Town. They premiered the song live at last year’s CMAs and Swift even made a surprise appearance to hand out the Entertainer of the Year Award, something she won in 2009 and 2011. Tonight she took home her fifth CMA Award, but first in this category.

Swift could not be in attendance, so Little Big Town members Kimberly Schlapman, Karen Fairchild, Philip Sweet, and Jimi Westbrook accepted the award on her behalf.

Congratulations Taylor, and Little Big Town, on your well-deserved win!