2017 CMA Awards Names Winner Of Musical Event Of The Year 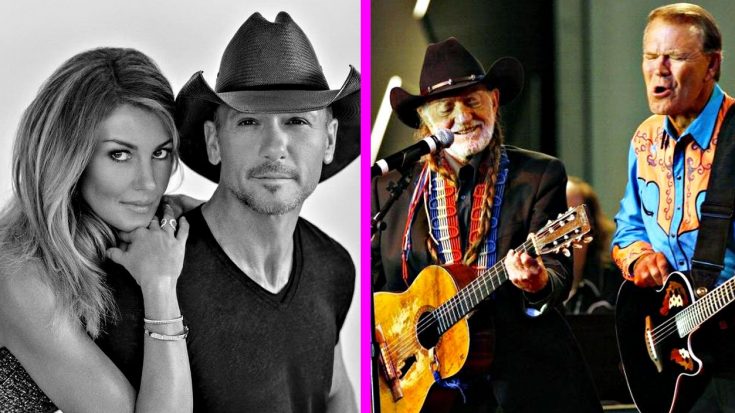 Some truly breathtaking moments in country music history happened this year and to honor the best and brightest the 2017 CMA Awards will be naming one of them the “Musical Event of The Year.”

Nominated are great performances, collaborations, and releases that have made a hefty impact on the industry in the last twelve months – and all of them are truly deserving of the title!

Tim McGraw and Faith Hill are nominated for their work on the smash-hit duet and lead single to their forthcoming album, “Speak to a Girl,” while Kenny Chesney and Pink’s duet, “Setting the World on Fire,” also took home a nod.

These two wildfire duets are up against the likes of a classic collaboration between the late Glen Campbell and Willie Nelson for “Funny How Time Slips Away,” and Eric Church‘s release of “Kill A Word” featuring Rhiannon Giddens. Pulling up the final nomination is Thomas Rhett‘s “Craving You” duet with Maren Morris.

For the 2017 CMA Awards Willie Nelson & Glen Campbell’s enchanting duet on “Funny How Time Slips Away” has been officially awarded the title of “Musical Event of The Year”!

The remake of this 1961 song first written and released by Nelson is a beautiful new take and features two longtime friends coming together to do what they’ve always loved to do: sing. This duet version was featured on Campbell’s final album, Adios, that was released just shortly before his passing on August 8th.

Listen to this remarkable duet in the video below and let us know what you think in the comments!