2018 ACM Award For Entertainer Of The Year Announced

By Miranda Raye on April 15, 2018
Advertisement 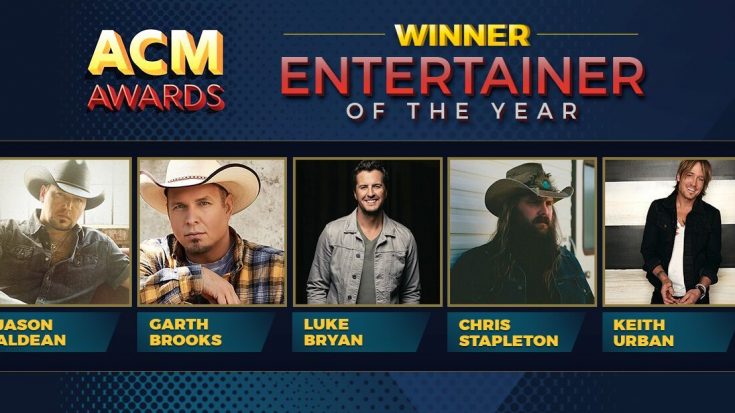 You know how the old saying goes, you save the best for last. And while all ACM Awards are prestigious, none carries more weight than the award for Entertainer of the Year.

The artists nominated for the Entertainer of the Year award are the cream of the crop in country music for any given year. Just to be nominated, you have to be a remarkable entertainer with well-reviewed tours and endless tickets sold. It also helps if you’ve had a well-charting single or two.

All of the artists nominated for the Entertainer of the Year award at the 2018 ACM Awards are more than deserving of such a distinction. Here they are:

After much anticipation, the ACM Awards came to its grand conclusion when Jason Aldean was announced as the 2018 Entertainer of the Year!

Final award of the night! Entertainer of the Year goes to… Jason Aldean! Takes the award again. Thanks Route 91 fans and everyone for the support. Been a tough last year. #ACMAwards #WestwoodOne pic.twitter.com/1PSsMtsBU6

This win is especially meaningful to Aldean, since he was the artist who was performing when the shooting occurred at the Route 91 Harvest Festival in Las Vegas. As you’re probably well-aware of, as usual, the ACM Awards were hosted in Las Vegas this year.

Congratulations to Aldean on this remarkable accomplishment!