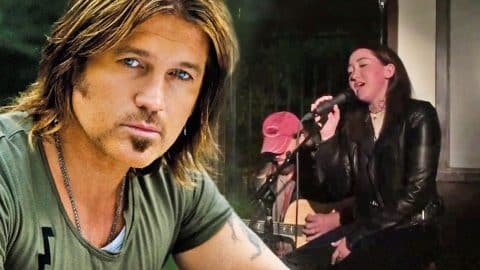 We all know Billy Ray Cyrus passed down his musical gene to his daughter, Miley, right? Well, how about his youngest daughter, Noah?

She recently went to Crave Cafe in Los Angeles to perform for their open mic night along with a special guitarist and back-up vocalist, her dad Billy Ray Cyrus! They performed his 1992 hit “Could’ve Been Me.“

The song was released eight years before she was even born, but she sounds great, especially in the chorus! At the tender age of 15, Noah Cyrus seems fearless and ready to take on the world!

After the performance she Instagrammed a special message to her famous dad.

Thank you for teaching me how to come out of my shell. You are my favorite guitar player I will EVER have. I love you daddy

We think she did really well and can’t wait to see her next cover!

Watch her version and her dad’s music video below!

It could’ve been me standing there with you…

It could’ve been me standing there with you…