Brantley Gilbert Repays The Veteran Who Gave Away His Purple Heart With A Once In A Lifetime Gift! 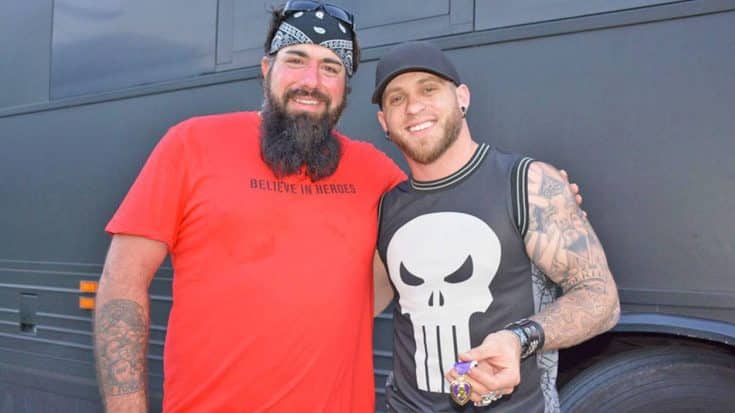 Brantley Gilbert is such an inspiration. Grab the tissues before watching this video, it is sure to touch your heart!

Brantley changed one man’s life during a motorcycle ride for the Wounded Warrior Project. Staff Sgt. Justin Patterson thanked Brantley for his support with something none of us saw coming… his first purple heart!

Justin told Brantley that he had not left his house for anything other than a trip to the grocery store in over two years. He explained how he suffered from PTSD and how thankful he is for everything Brantley has done to support the Wounded Warrior Project. As a ‘thank you’ Justin gave Brantley his first purple heart, saying, “My blood, sweat and tears are on this and that’s how I earned it.”

Brantley was blown away, and ended up returning the favor in an incredible way.

While interviewing with Fox & Friends and telling his story, Justin was surprised by a video from Brantley himself! To thank Justin, Brantley said something very touching,

I’ve already told you this a couple of times, but there’s no way I’ll ever be able to thank you enough for your gift while we were on the ride… It means more to me than you’ll ever know. There’s no way I’ll ever repay you for that, but I’m not gonna make it to the CMT Awards this year and me and my fiancee have two seats that are available. Hopefully you and your wife aren’t too busy and ya’ll can check it out. We’d love you to be there representing us that night.

Justin was so surprised, and clearly thankful!

You never know what impact you may have on someone’s life, and this story is a perfect example of that.

We’re so inspired by this special moment between Brantley and Justin! So check it out for yourself, and you’ll be glad you did!