Dukes Of Hazzard Car, ‘General Lee’, To Be Stripped Of Controversial Confederate Flag 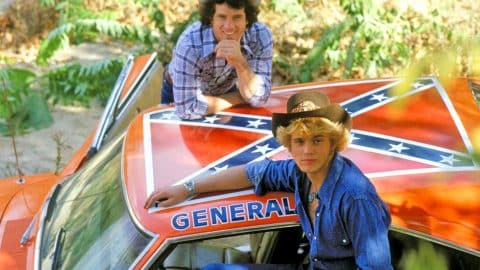 The iconic orange ’69 Dodge Charger from the television show, Dukes Of Hazzard, known as General Lee, will be stripped of the Confederate flag. Ever since the appalling shooting at a Bible study at Charleston’s Emanuel African Methodist Episcopal Church that left nine dead, people have been calling for the removal of the Confederate flag. Warner Bros. spoke to Vulture, confirming this. “Warner Bros. Consumer Products has one licensee producing die-cast replicas and vehicle model kits featuring the General Lee with the Confederate flag on its roof — as it was seen in the TV series. We have elected to cease the licensing of these product categories.”

It doesn’t just stop there, though. The South Carolina governor has called for the removal of said flag at the state capitol and many companies have followed suit and will be taking the flag of the Confederacy off the shelf. Walmart, Amazon, eBay, and Sears have all announced its removal.

So, while the products featuring General Lee will still be available, they’ll just be sans the Confederate flag. The flag is a very controversial subject, while some see it representing racism and slavery, others see it in a very different context – Southern values and heritage.

What are your thoughts?