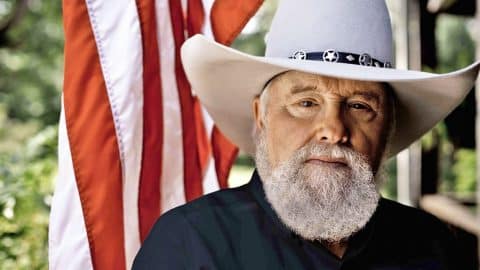 Charlie Daniels is known for sharing his opinion on controversial subjects, especially politics. This can be seen in an open letter he wrote to President Obama on his official website. So, it shouldn’t come as a surprise that the penned a letter about the tragedy at the Emanuel African Methodist Episcopal Church in downtown Charleston, as well as the controversy that is surrounding the confederate flag.

Charlie first expresses his sorrow and sympathies over the senseless murder of innocent people, giving us a look at his softer side. He then delves into the topics of the confederate flag, race, prejudice, and being Southern.

The recent senseless act of slaughter in a church in Charleston, South Carolina awakened America to the ever present lunacy and evil that walks among us and has also reopened some old wounds and deep feelings on both sides of a long festering situation.

Before I go any farther with this piece, I wish to express my love and admiration for the people of Charleston who have, in the face of immense pain, shown a restraint and a common sense seldom seen in tragic situations involving race.

When I saw the pictures of the people who had been murdered I made the statement, “I know these people”, which I didn’t mean literally, but figuratively, in that they were the kind of Christian people I have been around all my life, worked with and sat in the pews of churches with.

Salt of the earth folks, who not only professed to know the Lord Jesus Christ, but lived their faith every day of their lives. The kind of people you want to have praying for you, the kind who know how to put their arms around a hurting person and comfort and console.

The kind of people who raised their families to turn to Almighty God in times of trouble and heartbreak, proven by the forgiving words spoken by family members in court to the monster who had wantonly murdered their loved ones.

As in all Satan inspired iniquity, God has the ability to bring great good and in this situation, the people of Charleston South Carolina have shown the world what being a Christian is all about and the depth of common sense and class that exists in that community.

I feel sure that a jury of peers in South Carolina will see that Dylann Roof gets what’s coming to him and justice will be served and meted out to the full extent of the law.

In relation to the main crux of my column today I would like to relate an experience I had in a Midwestern city when the band was appearing with the local symphony orchestra.

In the evening before the show started, one of the venue staff came to me and said, “There is a gentleman out front who is offended by the confederate flag on your piano”.

I responded that we didn’t have a Confederate flag painted on our piano.

The upshot of the whole thing was that Taz, our keyboard player, had an American flag and a Tennessee flag with the flagstaffs crossed on the front of his piano with a drawing of his namesake, a cartoon Tasmanian Devil, and the phrase “Yessiree, Tennessee” painted under it.

The point I’m making is that this gentleman was probably the kind of person who looks for something to be offended about and sees things that aren’t even there in an attempt to find something.

Of course the situation concerning the Confederate flag in Charleston is a much more serious situation with justifiable feelings that go back a century and a half, and the problem has the potential to be a racially divisive one.

The bottom line is that the flag in question represents one thing to some people and another thing to others.

Far be it from me to advise the people of South Carolina or any other state as to what they should fly over their capitol buildings or anywhere else in the state for that matter, but I truly hate to see the opportunists move in and create a symbol of hate out of a simple piece of cloth.

Of course we know most politicians are going to chime in and glean whatever political hay that is available, but, in my book, the corporate rush to rid their shelves of anything with the Confederate battle flag on it is pure hypocrisy.

If they felt that deeply about the subject, they should have done something years ago and I notice they have no problem accepting the profits from the merchandise they have on hand.

I have received many requests to do interviews on this subject and had a lot of tweets asking me to comment, but I declined, wanting to take the time to explain my feelings in detail, without having to answer other people’s loaded questions or express myself in 140-character limit of Twitter.

This will have the potential to be lengthy, so bear with me and I will try my best to relate my honest feelings on the Confederate flag in question which was actually the battle flag carried by several Confederate army regiments, and not the official flag of the Confederacy.

I was born in 1936, a mere 71 years after the Civil War ended when the South was looked upon by what seemed to be a majority of the Northern States as an inbred, backward, uneducated, slow-talking and slower-thinking people, with low morals and a propensity for incest.

This was in the days before television and about all the folks up North knew about Southerners was what they heard and there were a lot of people who took great pleasure in proliferating the myth, and some still do it to this day.

As you might suppose, people in the South bitterly resented this attitude of superiority and in some quarters the words “damn” and “Yankee” became one word and a somewhat fierce type of Southern pride came into being.

The Confederate battle flag was a sign of defiance, a sign of pride, a declaration of a geographical area that you were proud to be from.

That’s all it is to me and all it ever has ever been to me.

I can’t speak for all, but I know in my heart that most Southerners feel the same way.

I have no desire to reinstate the Confederacy, I oppose slavery as vehemently as any man and I believe that every human being, regardless of the color of their skin is just as valuable as I am and deserves the exact same rights and advantages as I do.

I feel that this controversy desperately needs to be settled without federal interference and input from race baiters like Al Sharpton, that it’s up to the individual states as to what they allow to be a part of their public image, what the majority of the people of any given state want should, in my opinion, be their policy.

Unfortunately, the Confederate battle flag has been adopted by hate groups – and individuals like Dylann Roof – to supposedly represent them and their hateful view of the races.

Please believe me when I say that, to the overwhelming majority of Southerners, the flag represents no such thing, but is simply a banner denoting an area of the nation and one’s pride in living there.

I know there will be those who will take these words of mine, try to twist them or call them insincere and try to make what I’ve said here some kind of anti-black racial statement, but I tell everybody who reads this article, I came up in the days of cruel racial prejudice and Jim Crow laws, when the courts were tilted against any black man, the segregated educational system was inferior and opportunities for blacks to advance were almost nonexistent.

I lived through the useless cruelty of those days and did not get my feelings out of some sensitivity class or social studies course, but made my own decisions out of experience and disgust.

I hold no ill feelings and have no axes to grind with my brothers and sisters of any color. The same God made us, the same God will judge us, and I pray that He will intervene in the deep racial divide we have in this nation and make each person – black or white – see each other for what we truly are, human beings, no better, no worse.

How about just a simple “AMERICAN”?

Pray for our troops and the peace of Jerusalem.

What do y’all think? What’s your opinion on this subject? Do you agree or disagree with this country music icon?