By Jennifer Pernicano on July 6, 2015
Advertisement 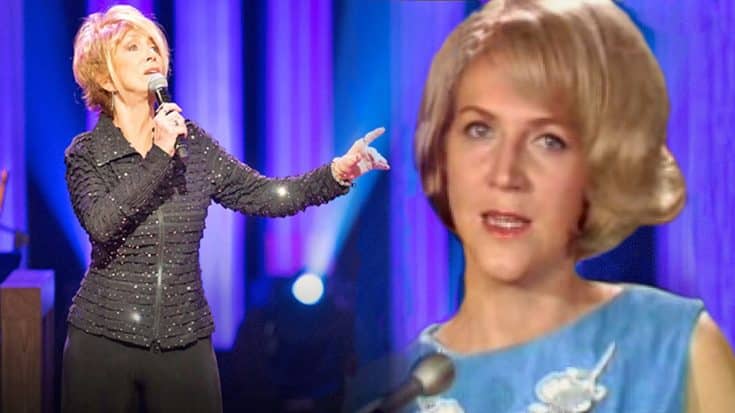 Jeannie Seely has been a Grand Ole Opry member for almost 50 years, and it’s about time we uncovered her first performance at the historic Ryman Auditorium!  She performed her first hit song, “Don’t Touch Me” on October 14, 1966 at the Grand Ole Opry and has been performing there ever since!

“Don’t Touch Me” was written by Jeannie’s husband, Hank Cochran.  He also wrote Patsy Cline‘s “I Fall To Pieces” and Eddy Arnold‘s “Make The World Go Away.”  Jeannie recorded the song in March 1966, released it to the country radio airwaves, and it started climbing the charts shortly after.  It remained at No. 2 on the Billboard Country Singles charts for three weeks, and even broke the top 100 on the pop charts!

In 1967, Jeannie won a Grammy for Best Female Country Vocal Performance for “Don’t Touch Me” and became the third woman to win the award.  Jeannie hit the ground running with her new success and released a string of Top 10 and Top 20 hits over the next few years. She was inducted into the Grand Ole Opry on September 16, 1967.

“Don’t Touch Me” has been covered by many artists including Tammy Wynette, George Jones, and Dottie West.  Ella Fitzgerald put a jazz spin to the song, and Etta James found success with her R&B version. The song has even been recorded in a reggae version!

Your hand is like a torch, each time you touch me
The look in your eyes pulls me apart
Don’t open the door to heaven if I can’t come in
Don’t touch me if you don’t love me, sweetheart

Your kiss is like a drink when I’m thirsty
And I’m thirsty for you with all my heart
But don’t love me then act as though we’ve never kissed
Don’t touch me if you don’t love me, sweetheart