Si Robertson Is Honored With Exhibit In Military Museum 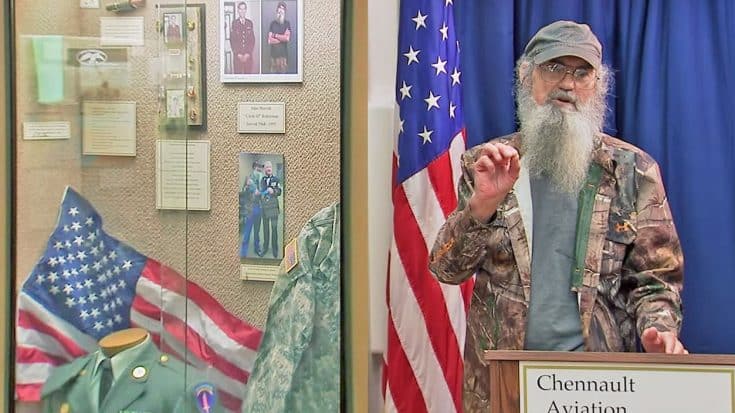 If you watch Duck Dynasty, you’ve heard one or two Vietnam stories from Uncle Si. All of which may or may not be true, but they are entertaining, nonetheless!

Now, it’s Si‘s time to shine when the Channault Aviation and Military Museum decided to honor him with his own exhibit in their museum.  They invited him, Willie and Willie’s beardless brother Al to spend the day checking out the museum before unveiling Si’s exhibit, and hilarity ensued.

Suddenly back in military mode, “Sergeant Si” jumps in a helicopter and starts calling Willie “maggot!” He yells:

“Back up, maggot! We don’t want the blades to hit you! This is ‘Nam, maggot! You need to get right!”

Si keeps exploring other planes when he spots a huge military truck, which he calls “A Deuce-And-A-Half” He immediately wants to take it for a spin.  Beardless Al went along for the ride, but with Si behind the wheel, that may not have been a great idea!!

After returning in one piece, it’s finally time for the unveiling of the Silas Merrit Robertson Exhibit.  In the exhibit, you can see his uniforms, mementoes, and letters. He got up in front of everyone to say a few words:

“First and foremost, I’m looking in the audience and there’s a lot of fellow soldiers out there. I appreciate every one of your service.  This is a humbling thing to actually have anything with my name on it in a military museum. To say I’m blown away, is an understatement.  Let’s say a prayer for our veterans.”

With a few “okay’s” here and there, his speech and prayer were touching and you can see just how proud he is to be a veteran, and how much the military service means to him.

Watch the funny, yet heartwarming clip from the brand new season of Duck Dynasty below!