Dolly Parton Surprises Child Actor With Starring Role In ‘Coat Of Many Colors,’ And It’s Adorable!

By Jennifer Pernicano on July 14, 2015
Advertisement 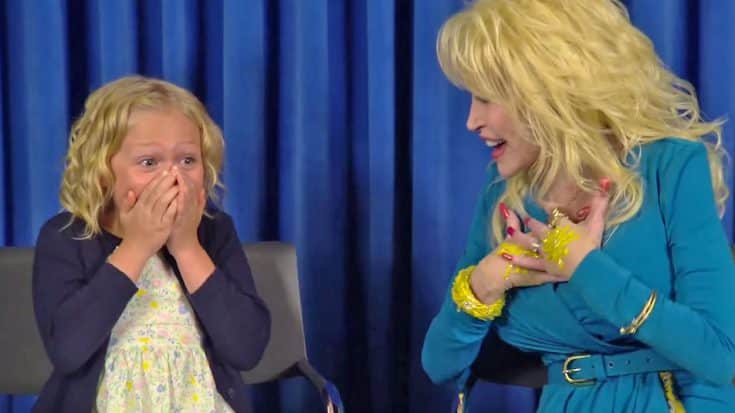 Coat of Many Colors is well on it’s way to becoming a reality and we can’t wait! Auditions have begun and they are slowly announcing who will be starring in the made-for-TV-movie about Dolly Parton’s life!

Seven-year-old Alyvia Lind auditioned for the role of “Little Dolly” and apparently nailed it, because Dolly wanted to tell her that she got the part herself! Alyvia thought she was meeting with more executives about the movie, but in walked Miss Dolly with some amazing news!

First giving the little blonde girl a big hug, Dolly sits her down and says, “What we’re really here to do is to announce that you have been chosen to play little Dolly in the movie.” Alyvia can’t believe it and immediately covers her mouth to hide a huge smile.

“Oh my gosh!…Yes! This is so cool!” was her response as she fidgeted in her seat out of pure excitement! Alyvia is currently acting on the soap opera The Young and the Restless and has previously starred as Adam Sandler’s daughter in Blended. She will soon be making a name for herself starring in Coat of Many Colors.

Coat of Many Colors will air on NBC and Dolly is serving as Executive Producer.

Watch her adorable reaction below!