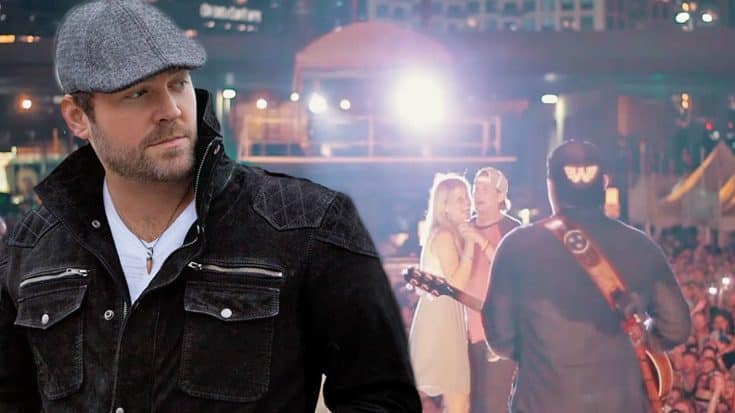 Country music fans are known to be hopelessly romantic, and there’s no surprise why! The music these fans fawn over are usually incredibly romantic and speak to each person differently!

At the Windy City Smokeout on Sunday, July 12th in Chicago, Zach Davis brought his girlfriend Lauren Kunes up to the stage during Lee Brice‘s set. While Lee and his band sang his ACM single of the year “I Don’t Dance,” Zach got down on one knee and asked Lauren a very important question. In front of a crowd of over 10,000, Zach proposed and Lauren said yes!

After she put her ring on, the newly engaged couple dance to the lyrics, “I don’t dance/But here I am/Spinning you round and round in circles” playing in the background.

It was picture perfect for any country fan, and you can hear the crowd go wild when he asks, “Will you marry me?“

Congratulations to the happy couple! It is so awesome of Lee to let his fans, whose first date was (can you believe it?!) a Lee Brice concert, become engaged during his performance.

After the event, Zach posted on Instagram thanking Lee Brice:

Thank you @leebrice for making the best day of my life so special! Thank you to all my best friends that helped pull this insane proposal off! #windycitysmokeout #proposal #leebrice #ChiCityMyCity #LKZDFarewellTour @wcsmokeout

Watch the incredible moment below:

What it’s all about…