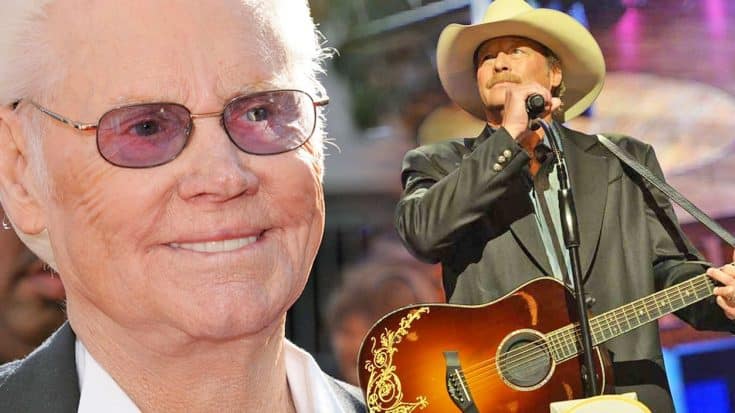 In this one-minute interview with Taste of Country, Alan talks about his newest album, and reveals a promise that he made to his idol, George Jones, many years ago: “Keep It Country“.

And that is exactly what the country legend is doing, keeping it really country! Angels and Alcohol is Alan’s twentieth studio album, and each track on this 10-track album is as country as the next. The album sums up everything country music pretty well: love, heartbreak and alcohol. With song titles like, “Mexico, Tequila and Me“, “You Can Always Come Home” and “Gone Before You Met Me“, you know you’re in for a good time.

When asked to explain his promise to George Jones, Alan said,

He’s like me I think, he just loved real country music, you know? That’s what he loved. He always promoted that and he would tell people, that you know. When I first met him in 1990 or something, I don’t remember know, he probably signed a picture or something for me and that’s what he wrote on there ‘Keep it country -George Jones’

Alan, we’re so happy that you’re keeping country – country! We can’t get enough of this album, and we know that George would be proud and honored that you have kept your word.

Alan left us with these powerful words, “I moved here to be country and thats what I’m trying to keep doing.“

Check out the video below to see Alan’s interview, and while you’re at it, check out Alan’s live performance of “Angels and Alcohol“, and we’re sure y’all will love it!