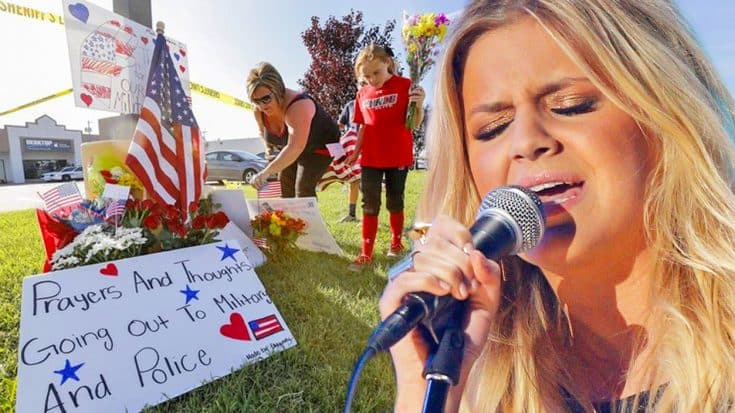 Kelsea Ballerini is country music’s newest rising star. Best known for her song, “Love Me Like You Mean It“, she took the stage during the Fox & Friends summer concert series. She didn’t sing her hit song though. Instead, Kelsea felt she needed to pay tribute and honor the victims of the shooting in Chattanooga on July 16th. She did just that with a beautiful rendition of “Amazing Grace“.

24-year-old Mohammad Youssuf Abdulazeez opened fire first at a military recruiting center in a strip mall, spraying at the glass windows and doors. He then drove seven miles away to a Naval reserve center where he rammed into the gate and killed four Marines and was then killed himself. The motive is still under investigation.

Kelsea decided to sing “Amazing Grace” which she admits was actually the first solo she ever performed. She especially feels close to the tragedy because she’s from Tennessee herself. “I’m from Knoxville, which is super close to Chattanooga, so my heart goes out to them and their families. They’re in all of our prayers, I know,” she says.

Many celebrities have posted on Twitter their support for the victims and their families, using the hashtag #NOOGASTRONG, including Kelsea.

Sending love and prayers to my friends in Chattanooga. #NoogaStrong pic.twitter.com/c3LSKA36vq

“I just think it’s important to show our support and show our love. So, they feel it, you know,” Kelsea says.

We definitely agree with Kelsea. Our hearts, thoughts, and prayers go out to all those affected by this senseless act of violence.

Amazing grace, how sweet the sound
That saved a wretch like me.
I once was lost, but now I’m found.
‘Twas blind, but now I see.
‘Twas grace that taught my heart to fear
And grace my fears relieved.
How precious did that grace appear
The hour I first believed.
When we’ve been there ten thousand years
Bright shining as the sun,
We’ve no less days to sing God’s praise
Then when we first begun.