Country Singers Band Together To Show Support After Chattanooga Tragedy 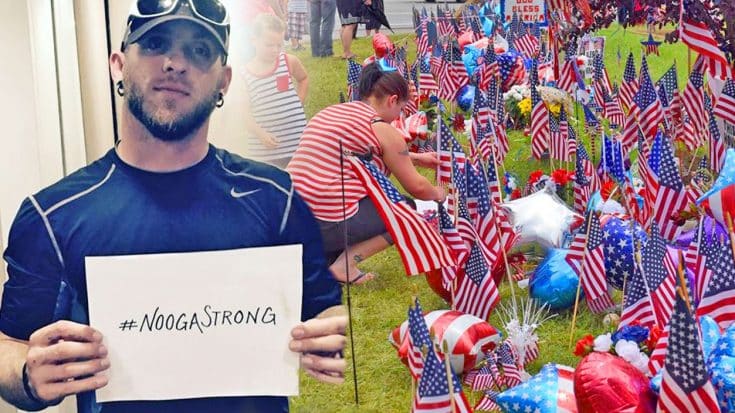 After the heartbreaking tragedy that claimed the lives of five service members in Chattanooga, many country musicians have showed their unwavering support for those who have been affected by posting to social media with the hashtag #NOOGASTRONG.

It’s always nice to see people that have fame and voices that the public listen to do something positive.  And after the horrific crime that 24-year-old Mohammad Youssuf Abdulazeez committed, we all definitely need something positive in the media.

Newcomer Kelsea Ballerini actually performed “Amazing Grace” during Fox & Friends summer concert series to pay tribute to those affected. Brantley Gilbert has also announced that he’ll play at a #NOOGASTRONG benefit concert for the fallen soldiers.  “I had tears in my eyes,” Gilbert told the country radio station in Chattanooga according to Taste Of Country. “It pissed me off, but at the same time I want do everything I can just to see if I can reach out and help these families a little bit.” Brantley went on to say, “We can’t ever give ‘em back (their loved ones), but maybe we can give ‘em something.” He also mentioned that him and his new wife have been praying for everyone affected.

Check out the posts below to see exactly what we mean.

Too close to home … #NoogaStrong

Sending love and prayers to my friends in Chattanooga. #NoogaStrong pic.twitter.com/c3LSKA36vq

Our thoughts and prayers go out to all in Chattanooga dealing with this horrible situation. #NOOGASTRONG pic.twitter.com/hQSzV5CM1K

Standing strong with our friends and family in #Chattanooga! #NoogaStrong pic.twitter.com/yKZpIbZynn

Our thoughts & prayers go out to everyone impacted by the events that went down in Chattanooga #NoogaStrong pic.twitter.com/ZlQql67ydU