Miranda Lambert Breaks Down On Stage Days Before Divorce Is Finalized 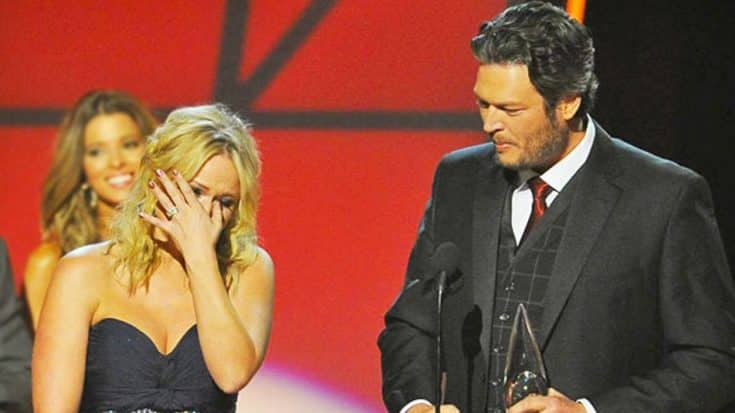 Two days prior to the official announcement of Blake Shelton and Miranda Lambert’s divorce after four years of marriage, country music’s rebel child, Miranda, broke down amidst performing her hit song, “The House That Built Me“.

Blake was actually supposed to record this song, but after Miranda had heard it, she wanted to record it herself. Released in 2010 on her Revolution album, “The House That Bult Me” has earned Miranda a Grammy, three ACM awards, and two CMA awards.

In this video released by TMZ, you can see Miranda speak through tears that she couldn’t quite choke back, “I bet you know the song, so y’all sing it for me.” Wiping away tears, she continues, “It starts with ‘Mama cut out pictures’. Can you do that for me?”

Performing at Cheyenne Frontier Days in Wyoming, Miranda sways back and forth while the music starts and her dedicated fans begin to sing her hit song for her. It really is a touching scene to behold.

Their divorce was announced July 20th. Blake and Miranda released this statement to the Associated Press:

“THIS IS NOT THE FUTURE WE ENVISIONED AND IT IS WITH HEAVY HEART THAT WE MOVE FORWARD SEPARATELY. WE ARE REAL PEOPLE, WITH REAL LIVES, WITH REAL FAMILY, FRIENDS AND COLLEAGUES. THEREFORE, WE KINDLY ASK FOR PRIVACY AND COMPASSION CONCERNING THIS VERY PERSONAL MATTER.”

Our thoughts and prayers are with the two country stars as they go through this difficult time.