By Manly Bryant on August 10, 2015
Advertisement 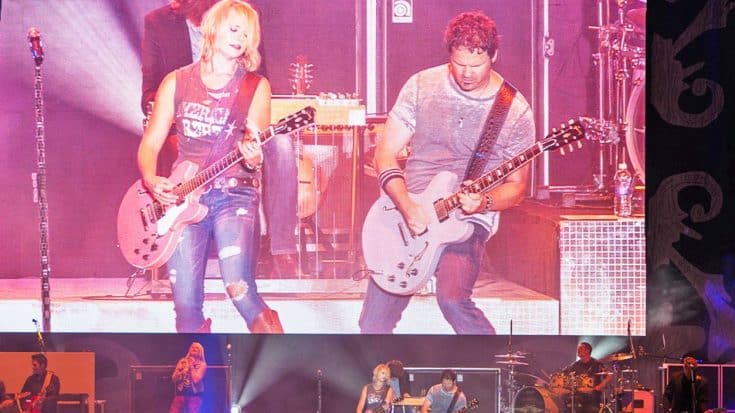 Minnesota’s We Fest 2015 had every country music lover in the mid-west on their feet during the all-star lineup. Most talked about of course was the split between two of country music’s most beloved artists. Former couple, Blake Shelton and Miranda Lambert. Their July 2015 divorce kicked up all sorts of dust, and headlining for the same venue just weeks after the divorce sparked an even greater interest in the festival’s outcome.

The Little Red Wagon singer seemed stronger than ever, singing all of her fan favorites along with a couple show stopping duets. Former contestant of The Voice/Team Blake member, RaeLynn and another songwriter friend, joined Lambert for the Dixie Chicks classic, “Cowboy Take Me Away”. Lambert eluded to how much she missed the country girl group, saying, “We really believe there should be more girls in country music”.

Dierks Bentley also shared the stage with Lambert for a duet of Tracy Lawerence’s “Texas Tornado”. Longtime friends, Bentley and Lambert joked with one another, Lambert saying she had more energy because she hadn’t been drinking all day.

Fans were no doubt surprised when Lambert mentioned the divorce on stage directly,

“I wish I’ve been drinking all day, I deserve it,” she told the crowd. “I just got divorced.”

Shelton ended his 2015 year of touring on the Minnesota stage, and definitely ended on a high note. He didn’t mention the divorce, but kept his naturally playful demeanor during his set.

“I’m getting too old for this s–t,” Shelton admitted, adding, “But because it’s my last concert of the year … No rules.”

Both artists seem happy and comfortable performing on the same stage again. Perhaps we haven’t seen the last of a Blake & Miranda collaboration. Here’s to hoping!