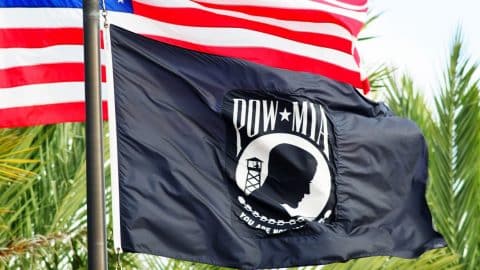 The opinion piece states that the POW/MIA flag actually has a racist history.

Rick Perlstein begins the article as if he’s writing about the confederate flag, but he’s not.

“You know that racist flag? The one that supposedly honors history but actually spreads a pernicious myth? And is useful only to venal right-wing politicians who wish to exploit hatred by calling it heritage? It’s past time to pull it down.

Oh, wait. You thought I was referring to the Confederate flag. Actually, I’m talking about the POW/MIA flag.”

In Perlstein’s book, The Invisible Bridge: The Fall of Nixon and the Rise of Reagan, he writes about how Nixon created the “cult” of POW/MIA to justify the death and destruction during the Vietnam war in order to make the U.S. seem like the only victim.

The bodies of pilots who were not recovered were once referred to as “Killed in Action/Body Unrecovered“, but during Nixon’s presidency they updated the terminology to “Missing In Action”. “That proved convenient, for, after years of playing down the existence of American prisoners in Vietnam, in 1969, the new president suddenly decided to play them up,” Perlstein writes.

According to Perlstein, Nixon believed the North Vietnamese violated the Geneva Conventions because they refused to give the names of of their American prisoners. This made the North Vietnamese look inhumane. Perlstein couldn’t disagree more and began to call out everything he believes to be a lie and false.

Children sported POW bracelets and drivers stuck POW bumper stickers on their cars. The flag, created by National League of Families of Prisoners of War, first flew in 1971.

Do you think this is ridiculous?

Show your support if you believe this flag should keep flying to honor those who have fallen and gone missing. You can read the entire opinion piece here.