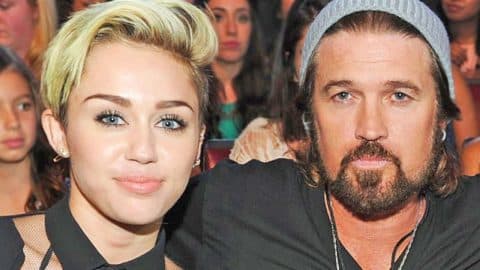 FOX/FOX VIA GETTY IMAGES from nydailynews.com

We all know Billy Ray Cyrus’ daughter. She started off as the homegrown Hannah Montana on the Disney channel, and then as she grew, just like most people do, she changed and crawled away from what everyone expected her to be and became what she wanted to be.

Miley Cyrus has that shock-factor and she’s proud of it, along with her country star dad who is nothing but happy for his daughter. Entertainment Tonight had a chance to interview Billy Ray before the MTV Video Music Awards on the red carpet.

“She’s always kind of reminded me of a mixture between Lucille Ball and Dolly Parton, and as I watch Miley evolve, she’s taken on more and more of those traits,” the “Achy Breaky Heart” singer says about his talked-about daughter.

When asked what his advice is for his daughter, he says:

Miley has definitely taken his advice! She’s obviously having the time of her life and being exactly who she wants to be. Billy Ray’s advice does ring true – what do you think?