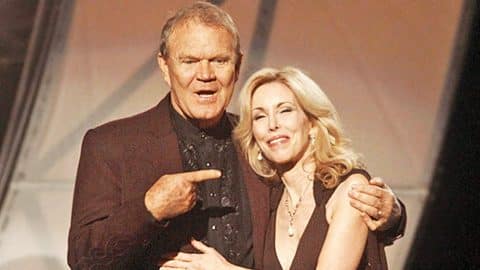 The news of Glen Campbell’s Alzheimer’s disease diagnosis was first released in 2011 and fans have been eagerly waiting for additional updates on the country legend’s challenging condition.

Campbell’s wife, Kim, gave a heartbreaking update on her husband in an interview on Broadway’s Electric Barnyard. “The disease is marching on,” she says. “The disease is in late stage six out of seven stages.” She admits that he’s physically healthy and very cheerful, but he unfortunately can no longer communicate verbally or understand when someone speaks to him.

Married to Campbell for 33 years, Kim knows her husband well and can cater to his needs without him having to express them. “Intuition”, she calls it.

Campbell has left the care center he was staying at and now lives at home. Though they try to find the joy in each day by sharing hugs and kisses, Kim admits that Glen can be very combative, especially when she’s trying to bathe or clothe him, which is very typical of those who suffer from Alzheimer’s.

“It’s been challenging,” Kim says. “He punched me in the eye, gave me a black eye… had a black eye for two weeks. It’s really hard to cope with. I don’t know.“

Kim is staying very strong while the “Rhinestone Cowboy” singer suffers from the degenerative disease. Though she’s been facing many challenges, she still gets to relish those tender moments when Glen will say, “I love you” and “Where you been?“.

In 2013, Campbell’s son, Shannon, performed a very special tribute to his father, singing “I’m Not Gonna Miss You“. What a special way to honor his father, who made such a lasting mark in the country music world.

Glen and his family are in our thoughts and prayers during this difficult time.