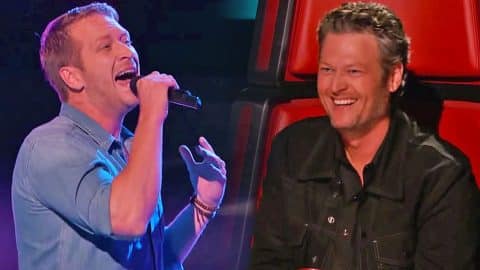 Barrett Baber is a high school teacher and father from Fayetteville, AR with a tragic past, but hope for his future…and he hopes that the hit show The Voice is the place to start.

Baber has always loved music, and so he started singing in church at a very young age. His hometown of Marion, AR was close to Memphis, TN, and his frequent visits to the city are what helped inspire his unique country/soul style of singing.

But there was also another, more tragic event that had a major influence on Baber’s life.

While traveling with his choir to perform at a concert in Germany, Baber’s plane crashed on the runway. Baber survived, and actually helped many of the passengers off of the plane.

But he couldn’t save everyone.

Baber said that 11 people were killed, along with two of his fellow choir members.

Baber said that after the incident, he questioned why he survived while others did not. But after his children were born, Baber realized that being their father was his purpose in life.

Despite his tragic past, Baber has continued to pursue his dream of becoming a singer. Prior to appearing on The Voice, Baber had been performing at various venues, and was starting to grow a fan base.

Well, after his blind audition on The Voice, it’s safe to say that Baber’s fan base has probably grown pretty fast.

For his blind audition, which was the last audition shown on the Season 9 premiere of The Voice, Baber chose to sing “Angel Eyes” by The Jeff Healey Band.

Baber’s voice has an unbelievable range, and he even uses some falsetto throughout his performance, something that earns him praise from Adam Levine.

“I will destroy for you. I’m on fire for you.” Levine said.

Shelton also had his own words of praise for Baber, “I feel like I’m watching Garth Brooks in concert right now.”

All of the coaches wanted Baber and his unique voice on their team, so who did he chose?

Baber is officially a part of Team Blake!

“What do you say Ol’Red?” Baber said, looking at Shelton.

Shelton nodded his head in satisfaction and said, “Let’s do it!”

As a four-time champion of the show, Shelton has proved that he knows how to coach his team members to be successful, and with a talented performer like Baber, he may just be set up for his fifth win.

We can’t wait to see more out of Baber and the rest of Team Blake in the future!