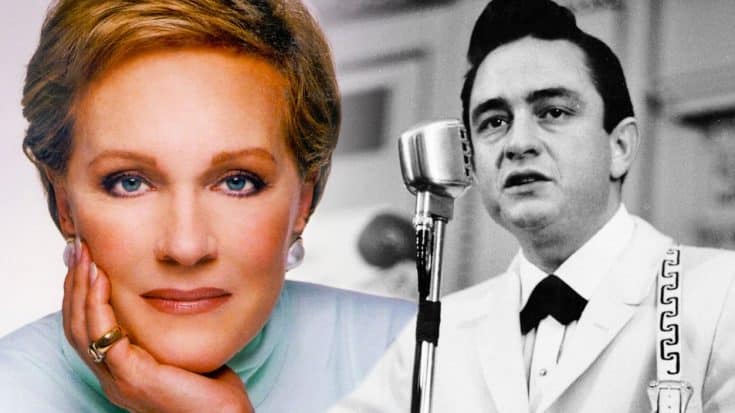 Julie Andrews is known worldwide for her beautiful voice. So when the Sound of Music star decided to sing some classic country songs, the result was breathtaking.

On the back cover of her country album, Love Me Tender, Andrews reflects on the recording process and the country music community:

“When I began to choose the songs for this album, they sounded so easy that I foolishly supposed that recording them would be a breeze. I have never been more wrong. The songs are not easy, they’re simple-plain, honest, simple – and I very quickly found out that is the hardest thing to sing. I had the best time in Nashville. I fell in love with the music, the lyrics, the countryside, and the people.”

For the album’s title track, Andrews is joined in a duet by none other than Johnny Cash.

“Love Me Tender” was originally recorded by Elvis Presley in 1956. A RCA Victor recording of Presley’s song reached the #1 spot on both the Billboard and the Cashbox charts in 1956.

Although it seems odd to pair up the lady who played Mary Poppins and “The Man In Black,” the contrast in their vocal styles makes for a beautiful recording.

Cash doesn’t sing much, but he does play along on his guitar, allowing Andrews’ vocals to truly shine throughout the song.

The end of the song is nothing short of stunning, as Andrews’ voice falls to a near whisper while Johnny speaks the last line over her’s  “I always will.”

Listen to this rare recording of Andrews and Cash singing “Love Me Tender” in the video below.