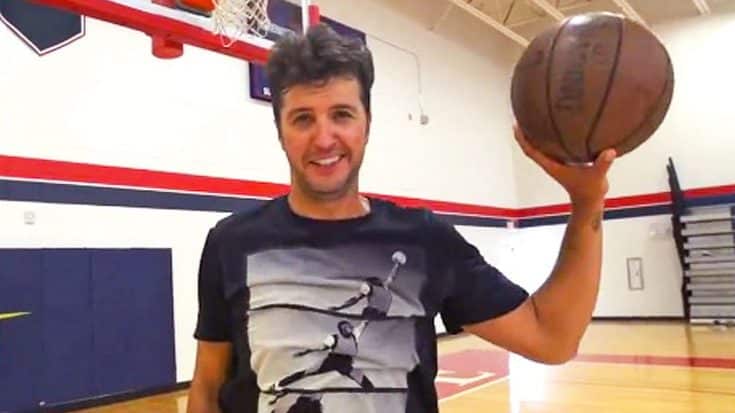 Luke Bryan loves a good game of basketball. So when Chicago Bulls player Jimmy Butler showed up to one of his concerts in Florida, Bryan knew he had to challenge him to a game.

Whatever the reason for Bryan’s messy hair, he’s very aware that it doesn’t even look like he brushed it that morning.

He comes up to the camera to address his messy hair, running his fingers through it as he says, “I fixed my hair today.”

If Bryan had been just as concerned about his game as his hair, maybe he would have faired a little better against Butler. His friends talk about how usually, Bryan can dominate the court, but he just can’t compete with Butler.

One time, Bryan goes to do a layup, and misses terribly. Very disappointed in himself, Bryan comes over to the camera and tells them to, “edit that.”

Bryan and Butler also engage in some friendly banter throughout the game, with Bryan saying he thinks he can guard Butler because the two of them kind of match up physically. That prompts Butler to tease Bryan for carrying a six pack of beer in his stomach, rather than having an actual six pack.

At the end of the game, Butler lets Bryan score a basket, which Bryan is very excited about.

“I don’t want to hurt his confidence, he’s got a show tonight,” Butler said.

Hopefully Bryan thought to comb his hair or put on a hat before his show that night.

Watch Bryan and Butler square off against one another in the most recent episode of Luke Bryan TV below!

Thanks for taking it easy on us Jimmy Butler #LBTV